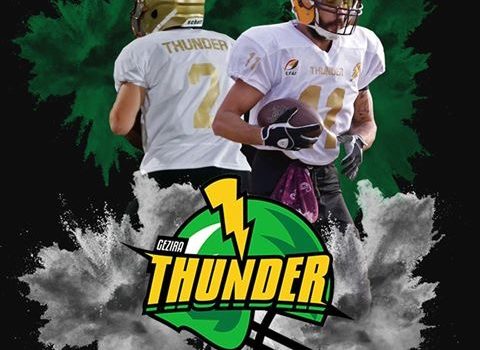 It takes great courage for a team to admit they need rebuilding, and the Gezira Thunder have an inspiring story to tell. While every article starts with team’s history, this one will start with the present.

The Thunder are coming back this season with a spirit that inspired us and motivation like no other. The repetitive loss last season cost the Thunder over 25 of their players. But neither the losing history nor the loss of players could stand in their way.

They’ve hired not one, but two American coaches for the season. First is their head coach and offensive coordinator John Martin who has the experience of 30 coaching American Football. Second is their defensive coordinator Lawrence Williams who has played football in Europe and coached for over 14 years. Its also important to note that the Thunder had Coach Douglas Fryer who helped the team in the off season until their two new coaches arrived, he will not be present for ENFL V however.

It’s safe to say that the Thunder are quite old school and are currently looking a step ahead. While importing players gives the team a boost, they chose to focus on hiring coaches in order to take that learning opportunity and build a solid base.

We’re not surprised of course with the Thunder’s founder being Ahmed El Refai who’s one of the first people to bring in American Football into the Egyptian community. Refai took it upon himself to invest into his team with the vision of changing football concept in Egypt and having a strong built base for a team that can compete for future years to come.

The Thunder also have German import QB Paul Zimmermann who played college football in Germany. They also have American Kent Blazer who’s been located in Cairo for many years now. Kent is an offensive line guard, being the only American lineman in Egyptian football history.

Its no doubt that an import QB with the added protection of American guard will be a duo that troubles defenses. Along with talented receivers like Osama Thabet this offense will definitely be able to make big plays.

But lets take a look back at the Thunder’s history and what are they trying to overcome? They were established in 2017 to be affiliated in ENFL IV. Playing their first season, the Thunder had to compete against much more experienced teams which led to many losses and no wins.

After the season, the players were devastated, with their eyes focused on winning, they chose to leave and play for other more established teams. This was nothing but the Thunder’s fuel to put their undivided focus on recruitment, practice and hiring experienced coaches to help the team.

It was hard to select 3 names from the 75 hungry men who are coming back this season. What made it even harder is the Thunder’s strategy which insists on the team’s name collectively and not individual players.

But we did our best and here are three names to keep an eye on this season. First is Osama Thabet, wide receiver and the ladies’ team head coach and offensive coordinator. Second is one of the most famous names among defensive players; Ahmed El Refai. And third is rookie linebacker Mohamed El Sawi.

The Gezira Thunder will play in the opening game against the AUC Titans. we must admit this will be one of the games we’re looking forward to, but aren’t we looking forward to all games really? The more important question though is will the Thunder clinch their first win in the first week of the season?

The Thunder, being one of the West teams will compete against 3 veteran teams being the Hounds, Tigers and Wolves. But we’re certain that the Thunder’s focus and motivation will give them the drive they need to compete in each game.