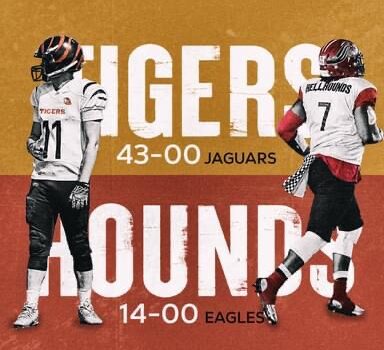 The third week of ENFL VIII has witnessed outstanding performances in both games, with the MSA Tigers’ win against the Zed Jaguars in the 1st game and the Cairo Hell Hounds winning the second game of the week against the Eagles Athletic Club in one of the most anticipated games of the season.

The Tigers and the Jaguars faced off in the first game where the Tigers earned 43 points to nothing. The Tigers were struggling to score during the 1st quarter, with a lot of incompletions and barely any advancement, it seemed like the Tigers were approaching the possibility of their first loss. However, they finally found their momentum before the half had ended, with a passing touchdown by their import QB Craig Coffman, who showed a skillful performance following this with 5 more passing touchdowns in the second half to have a total of 400 passing yards earning him the MVP of the game.

While the Tigers’ impressive win moved them up the chart to rank second, the Jaguars still without a doubt put pressure on them through an entire half, solidifying the fact that they have been improving throughout the season. The Jaguars’ linebacker Abdelrahman Eid started on offense this week to turn heads in his skillful performance as a running back. TheZed Jaguars are showing great potential, and we are eager for their performance next week!

The Cairo Hellhounds and The Eagles Athletic Club had a rival and fierce match that ended with the win of Cairo Hell Hounds putting them in the lead of the chart. Both teams’ defensive units were putting pressure on their rivals’ offensive units, ending the first half with no points for either team.

The Cairohellhounds managed to break the cycle with a run that led seif hatem to score a 47 yards touchdown earning himself the mvp of the game. Before the game ended, the Hounds defensive import micheal tex scored a rushing touchdown as one of his two plays with the Hounds’ offense.

The Eagles’ defensive unit was definitely putting a lot of pressure on the Hounds during the first half, however, their offensive unit struggled to score the entire game. This was their first loss in the season, and we expect a great and strong comeback from the Eagles in the upcoming games.

Who was your favorite player from week 3?